The Great Pyramids of Egypt and the Sphinx

The Pyramids of Giza and the Sphinx 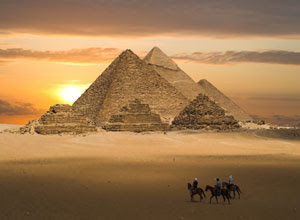 Among the major tourist sites, there is only one considered to be “The major” and on top of any list - The Pyramids of Giza
There are three main Pyramids here, which were built in the 4th Dynasty (circa 2550 B.C). The Pyramids of Ancient Egypt were built as tombs for Kings (and Queens), and it was the exclusive privilege to have a Pyramid tomb. However, this tradition only applied in the Old and Middle Kingdoms. Today there are more than 93 Pyramids in Egypt; the most famous ones are those at Giza.
The Great Pyramid of Khufu is by far the most famous Pyramid in Egypt, the biggest, tallest, and most intact. After its construction it became one of the “Seven Wonders Of The World”, and today, it is the only one of them remaining. For a period of 4300 years, the Pyramid was also the tallest building on earth, until the French built the Eiffel Tower in 1889 to take that accolade. 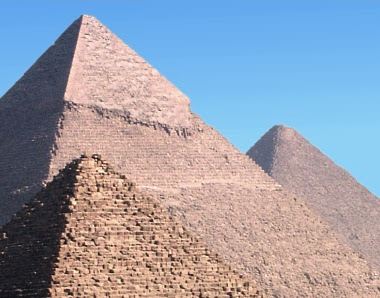 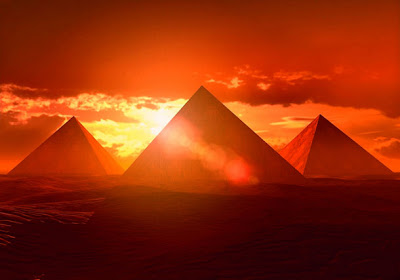 Khufu’s Pyramid is built entirely of limestone, and is considered an architectural masterpiece. It contains around 1,300,000 blocks ranging in weight from 2.5 tons to 15 tons and is built on a square base with sides measuring about 230m (755ft), covering 13 acres!  Its four sides face the four cardinal points precisely and it has an angle of 52 degrees. The original height of the Pyramid was 146.5m (488ft), but today it is only 137m (455ft) high, the 9m (33ft) that is missing is due to the theft of the fine quality limestone covering, or casing stones, by the Ottoman Turks in the 15 Century A.D, to build houses and Mosques in Cairo. You will find that the entrance of the Pyramid is located at the northern side, the same as almost every Pyramid in Egypt. On this side there are actually 2 entrances, one is the original, and is 17m (55ft) above ground level, and the other one is a man-made forced entrance located below it. Created in the 9th Century A.D by Khalif El-Mamoun, who was seeking the treasures that he thought might have been kept inside the Pyramid. He sent out stonemasons to open up an entrance, and they cut it midway across the centre of the northern side. Their tunnel goes almost 35m into the Pyramid, and was crudely cut, and at the end it connects with the original inner corridors of the Pyramid. Nothing was found inside, as it was plundered in antiquity. Nowadays visitors, to the site, use Mamoun’s entrance to gain access into the Pyramid, as it is actually considered to be a shortcut. 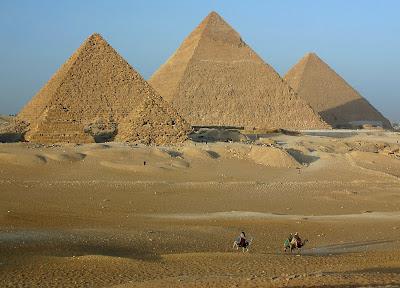 From the main entrance of the Pyramid there is a long narrow corridor with low roof that descends for more than 100m (330ft), which takes you to a chamber, located about 24m (79ft) below ground level, which is an unfinished burial chamber with very little fresh air inside, and is inaccessible today.
Almost 20m (66ft) from that descending corridor there is another corridor connected to it, which takes you up into the heart of the Pyramid. This ascending corridor ends up at one the great parts of the Great Pyramid, the “Grand Gallery”!  It is a large, long, rectangular hall, which is 49m (161ft) long, and 15m (49ft) high, with a long tunnel, at the bottom, that takes you the 2nd chamber, which is famously known as the “Queens Chamber”. It actually has nothing to do with a Queen, and was given this name by the early Arabs, who went inside the Pyramids and gave it its name. It is commonly believed that it served as a magazine, or a storeroom, inside the Pyramid.
When you ascend the “Grand Gallery”, you will find, at its end, an entrance to the 3rd chamber, which was the real burial chamber of King Khufu, and this is where you will find his stone sarcophagus, which was made out of one block of granite. You will find this chamber to be really amazing, it is rectangular in form, has a flat roof, and is built out of granite that was brought from the city of Aswan, which is located 1000Km (625 miles) away. The roof consists of 9 slabs of granite; each one estimated to be around 50 tons in weight! Above the roof of the burial chamber, the Ancient Egyptians built 5 small relieving chambers so that the huge pressure, of the weight above, would not cause the burial chamber to collapse. These 5 chambers are also made of granite, and are about 1m (3 ft) above each other. The tops of the first 4 are flat, the 5th one having a pointed top to divert the enormous pressure of weight away from the burial chamber.
Both the northern and southern walls of the burial chamber have two small tunnels with rectangular entrances. They are small, and once were thought to go all the way through the outer sides of the Pyramid, though no exterior openings have been found, and are believed to be “star shafts” that served a certain purpose in the ancient cult connecting the King with the stars.
The Great Pyramid of Khufu 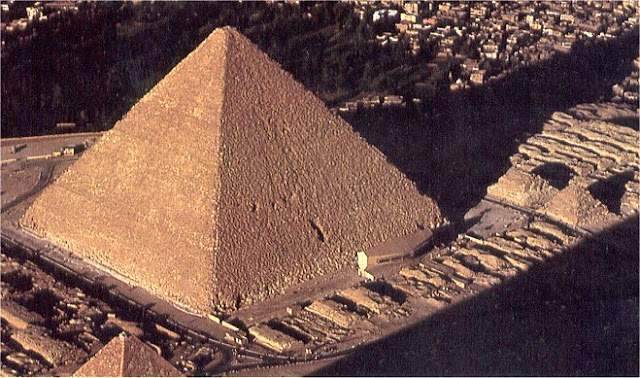 The Great Pyramid is the Pyramid of the great Egyptian King, Khufu.
The Great Pyramid, called Akhet Khufu (The Horizon of Khufu), is the largest pyramid in Egypt. The pharoh Khnum-khuf, called Khufu for short, and Cheops in Greek, created this pyramid after he came to the throne in 2551 BC upon the death of his father, Sneferu, creator of the Meidum and Dahshur pyramids. So massive is this pyramid that it almost, if not does, exceeds the total amount of stone in the three created by Sneferu. It would be very easy to say that Khufu took his dad's idea and ran with it, so to speak. 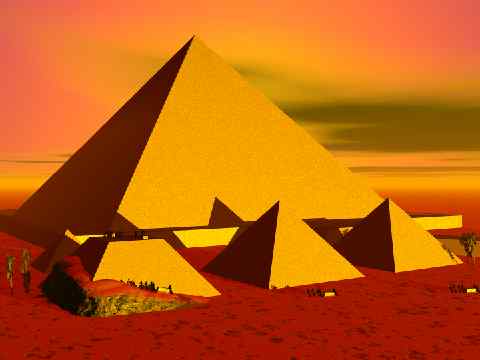 The name “Cheops” is also associated with this King and his Pyramid, the name being given to him by the Greeks. Though both names are generally accepted, Khufu was used in this description because it was his birth name! The same goes for Khafre (Chephren in Greek) and Menkaure (Mycerinus).
The Pyramid of Khafre: 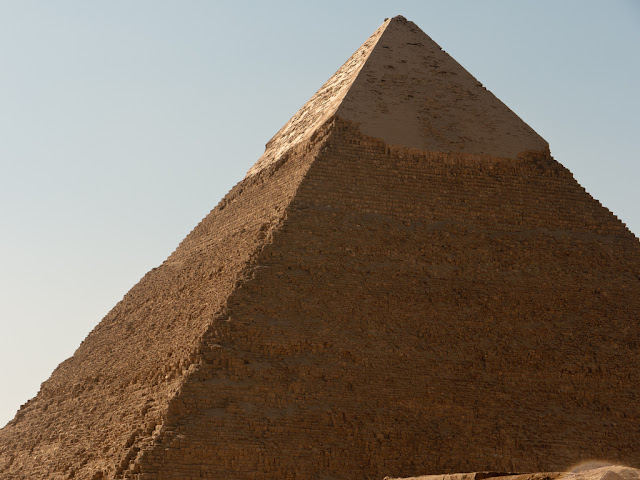 Khafre’s Pyramid, or the 2nd Pyramid, is easily recognisable by the layers of its original casing stones that still remain near its summit and this, along with the fact that it actually stands on a higher part of the plateau, gives the impression that it is taller than the Great Pyramid. An optical illusion, as it is only 136m (446 ft) tall, with sides of 214.5m (704ft), a surface area of 11 acres and an angle of 53 degrees. It also has lost some of its original height through the years, once being 143.5m (471ft) tall.
The only similarity to his father’s Pyramid is the entrance in the same, north facing side. There are no corridors leading into the heart of this Pyramid, the burial chamber being underground, and a long descending passageway has to be negotiated to reach it. This entrance is 50 feet (15m) above ground level, leading to the narrow passage, which descends at a 25-degree angle into the large burial chamber, which measures 14.2m by 5m by 6.9m (46.5ft by 16.5ft by 22.5ft). To take the weight of the pyramid, the roof of the chamber is set at the same angles as the pyramid face. A large, black sarcophagus is found in this room. 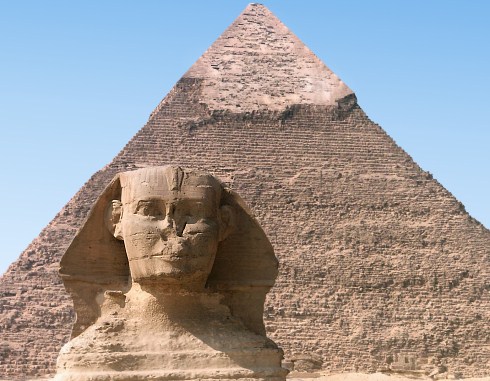 A lower corridor is directly under the upper corridor, and once contained a portcullis that could be lowered to prevent entry as well as an unfinished burial chamber, which was cut from the bedrock and, it is thought, unused. Like the upper corridor, this one has a 25-degree slope, it then levels out, climbs slightly, and eventually the 2 of them join together. The united passageway then leads to the burial chamber.
The Pyramid of Menkaure: 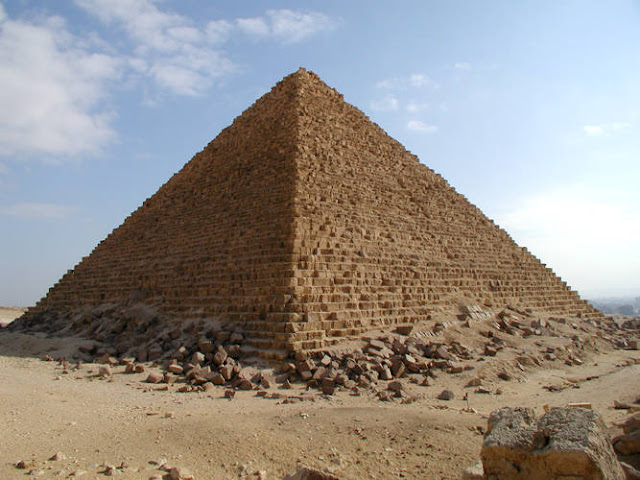 Khafre’s son, Menkaure, built the smallest of the 3 main Pyramids on the Giza Plateau. This one was only a mere 65.5m (215ft) tall, nowadays 62m (203ft), with sides of only 105m (344ft) and an angle of 51.3 degrees. It is thought that this Pyramid was altered during its construction, and made a lot bigger than originally planned. The original, smaller Pyramid had a simple descending corridor and burial chamber, but when it was enlarged, a new corridor was built with 3 portcullises and a small panelled chamber. Later still, another burial chamber, along with a storeroom were added at a lower level. This Pyramid, like its 2 neighbours, has a north facing entrance. 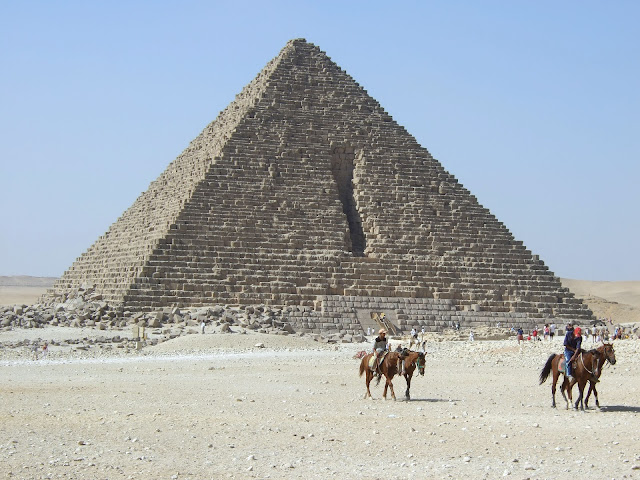 Apart from the size, Menkaure’s Pyramid differed from the other 2 in the choice of casing stones. Whereas the Pyramids of his father and grandfather were completely cased in fine, white, Turah limestone, Menkaure’s Pyramid was only partly cased in Turah limestone, from about 15m up! The first 15 metres was cased with pink granite, which had come from Aswan, the last of which was taken by Muhammad Ali Pasha (1805-1848) who used them to construct his arsenal in Alexandria. 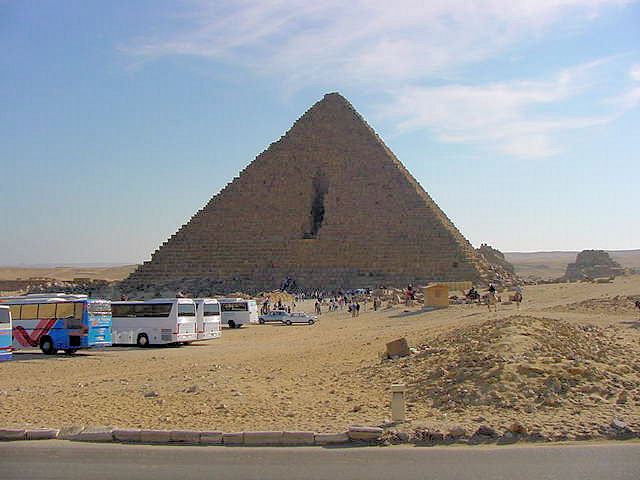 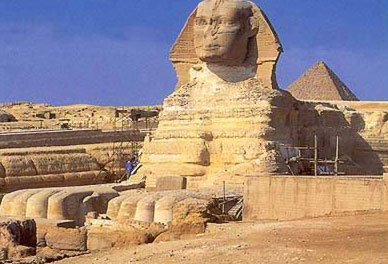 The Great Sphinx, or as the ancients knew it, “Shesib Ankh” or “the living image”, has to be one of the most recognizable constructions in history. Think of the Sphinx and you automatically think of Egypt and the Giza Plateau. 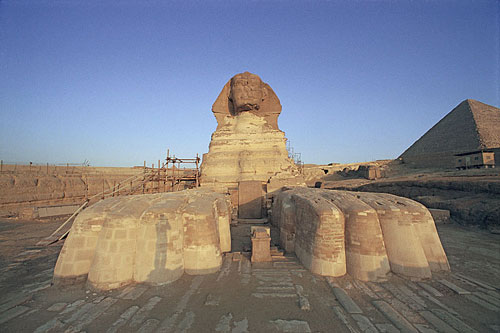 Sculpted from soft sandstone, many believe that it would have disappeared long ago had it not been buried in the sand for so many long periods in its lifetime. The body is 60m (200ft) long and 20m (65ft) tall. Its face is 4m (13ft) wide with eyes measuring 2m (6 ft) high. It faces the rising sun, and was revered so much by the ancients, that they built a temple in front of it.

The 18th Dynasty King, Thutmose IV installed a stele between its front paws, describing how, when Thutmose was a young Prince, he had gone hunting and fell asleep in the shade of the Sphinx ‘s head. Thutmose had a dream where Ra Hor-Akhty the sun God, talking through the Sphinx, spoke to him, telling the young Prince to clear away the sand because the Sphinx was choking on it. The Sphinx said to  him that if he did this, he would become King of Egypt . 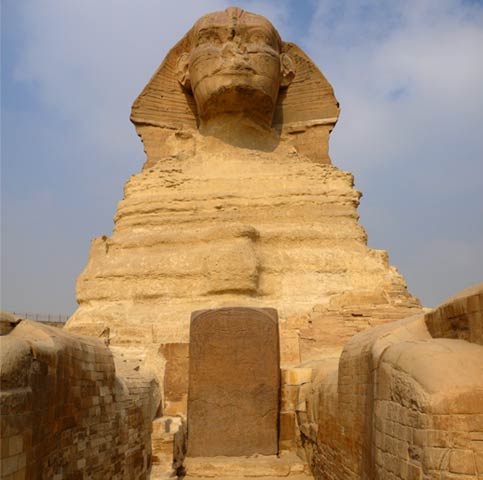 Thutmose cleared away all the sand and s after 2 years,  the god fulfilled his promise to the price and he was made king of Egypt
Today, part of the “uraeus” (the sacred cobra at the forehead ), and the nose are missing (not shot off by Napoleon’s men as many believe, but  were destroyed by Muhammad Sa'im Al-Dahr, a Sufi fanatic from the Khanqah of Sa'id Al-Su'ada. 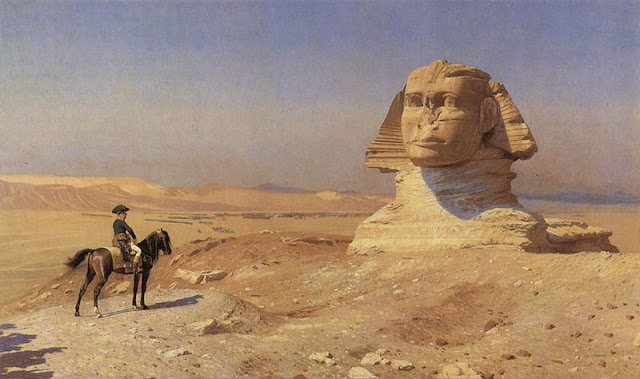 In 1378, upon finding the Egyptian peasants making offerings to the Sphinx in the hope of increasing their harvest, Sa'im Al-Dahr was so outraged that he destroyed the nose!). There are parts of a beard in the Cairo and British Museum in London  which reputedly belong to the Sphinx, but many Egyptologists deny this, as the style of beard found, does not relate to the “nemes” that The Sphinx wears – different Dynasties! 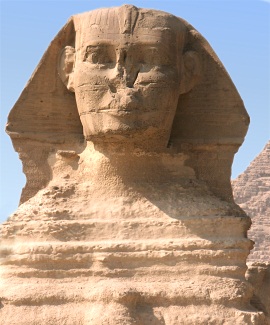 Because of the soft sandstone, the Sphinx has been repaired many times; sometimes the repairs causing even more damage! Also, due to the wind, humidity, and pollution from modern Cairo, its condition is still deteriorating, and the present renovations are a never-ending task.
I hope this gave you a glimpse of information about the Pyramids of Giza. 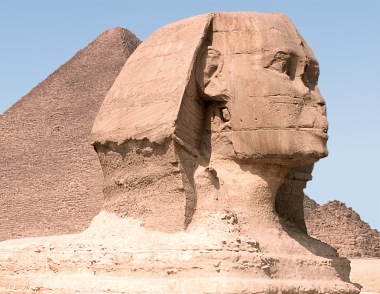 Posted by Blackrainbow at 2:52 AM