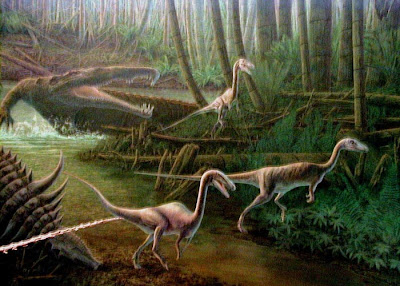 The Triassic Period
248 to 206 Million Years Ago
In many ways, the Triassic was a time of transition. It was at this time that the world-continent of Pangaea existed, altering global climate and ocean circulation. The Triassic also follows the largest extinction event in the history of life, and so is a time when the survivors of that event spread and recolonized. 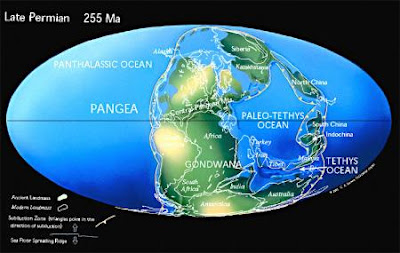 The organisms of the Triassic can be considered to belong to one of three groups: holdovers from the Permo-Triassic extinction, new groups which flourished briefly, and new groups which went on to dominate the Mesozoic world. The holdovers included the lycophytes, glossopterids, and dicynodonts. While those that went on to dominate the Mesozoic world include modern conifers, cycadeoids, and the dinosaurs.
Climate and Geography During the Triassic period, all of the earth's continents were joined together into a vast landmass called Pangaea (which was itself surrounded by an enormous ocean called Panthalassa). There were as yet no polar ice caps, and the climate was hot and dry, punctuated by violent monsoons.
Terrestrial Life The start of the Triassic period followed the Permian Extinction, an event of unknown cause that wiped out over two-thirds of land-dwelling vertebrates and 95 percent of ocean-dwelling species. Taking their place were the therapsids (mammal-like reptiles), archosaurs (from which the first dinosaurs like Herrerasaurus and Eoraptor evolved, as well as the first prehistoric crocodiles and pterosaurs), and primitive reptiles called pelycosaurs (the most famous of which was Dimetrodon). It was during the late Triassic period that the mammal-like reptiles evolved into the first mammals.
﻿
﻿ ﻿ ﻿
﻿
﻿ Marine Life Because the Permian Extinction depopulated the world's oceans, the Triassic period was ripe for the rise of early marine reptiles like Placodus and Nothosaurus. The vast Panthalassan Ocean was soon restocked with new species of prehistoric fish, as well as simple animals like corals and cephalopods.
Avian Life Except for insects, the skies of the early Triassic period were relatively quiet. It was only toward the end of the Triassic that the earliest pterosaurs, such as Eudimorphodon, appeared on the scene, and they probably weren't the most accomplished fliers.
Plant Life The Triassic period wasn't nearly as lush and green as the later Jurassic and Cretaceous periods, but it did see an explosion of various land-dwelling plants, including cycads, ferns, and Gingko-like trees. Part of the reason there were no enormous dinosaurs during the Triassic (along the lines of Brachiosaurus) is that there simply wasn’t enough vegetation to nourish them
Some Dinosaurs of the Triassic Period
Coelophysis 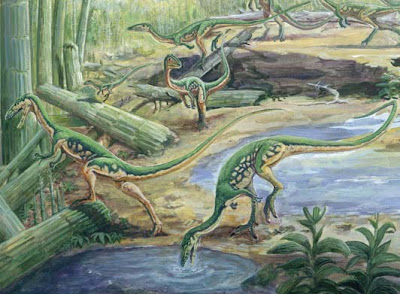 (say SEE-low-FY-sis)
The name refers to its hollow bones.
Coelophysis lived 220-200 million years ago during the late Triassic Period. It was about 1 to 3 metres long and weighing about 30 kg.

It had a long slender neck. Coelophysis had a double hinged lower jaw, so that it could cut prey with a sawing action if necessary. Its jaws had lots of small, sharp teeth indicating that it was a carnivore. It possibly even ate other Coelophsis. It was built for speed.
In 1947, hundreds of Coelophysis skeletons were discovered buried together in New Mexico. Paleontologists believe they probably died in a flash flood.
2. Plateosaurus 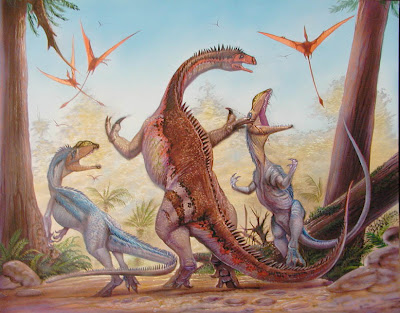 (say PLAT-ee-oh-SAW-rus)
It lived about 22 to 215 million years ago in the Late Triassic period. Its name means 'Flat lizard'.

Plateosaurus belonged to a group of dinosaurs known as prosauropods which was related to the sauropods of the Jurassic and Cretaceous periods.
Plateosaurus was a 9 metre long herbivore weighing about 4 tonnes. It was about 4 metres tall. It evolved in the Late Triassic period and lived up till the Early Jurassic period. 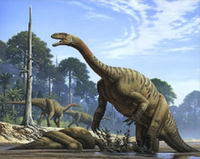 It was the first of the giant dinosaurs to feed only on plants and the first to be able to feed on vegetation in trees by evolving a long neck. It had long back legs and a long tail. Its mouth was like a beak but had teeth. It walked on four legs but probably stood on its back legs and grabbed branches with the claws on its front legs as it fed on leaves. Palaeontologists believe that they may have lived in herds.
Fossils have been found in Germany, France and Switzerland
3. A flying reptile of this period: Peteinosaurus 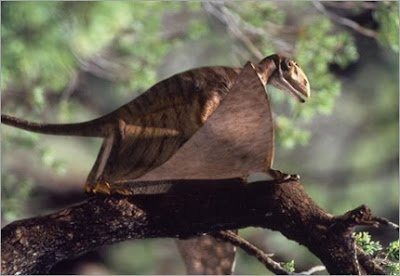 (say pet-INE-oh-SAW-rus)
The name means 'Winged lizard'. It was not a dinosaur, but a flying reptile living at the same time.It lived about 222 to 215 million years ago in the Late Triassic period
It was an early pterosaur, or flying reptile, with a wingspan of about 60 cm across. It weighed about 100 grams. 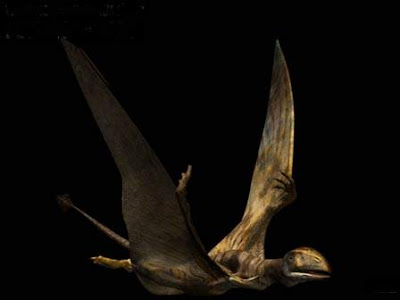 Peteinosaurus had very light bones. It had sharp, cone-like teeth. It caught and ate insects as it flew. It had a long finger on its hand, and skin stretched from this to its foot to form a wing on either side. The wings were attached to the body and thigh. The straight tail was about 20 cm long, and was used to steer when it was flying.
Peteinosaurus is one of the earliest vertebrates to be able to fly rather than glide. Complete fossils were found in Cene, in the Italian Alps 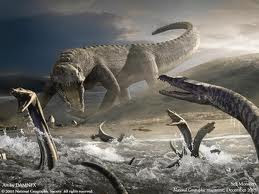 An artist's rendering shows hatchling nothosaurs heading for the safety of water as a hungry but terrestrial Ticinosuchus attacks near a lagoon in ancient Switzerland. Nothosaurs lived during the mid- and late Triassic period and were among the earliest reptiles to take to the sea. Because nothosaurs may have had to come ashore to lay eggs, the eggs and hatchlings would have been vulnerable to Ticinosuchus. Yet once the hatchlings reached deeper waters, they were safe—for the moment. 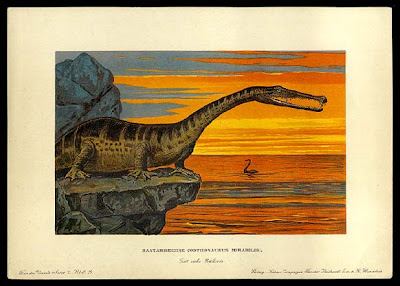 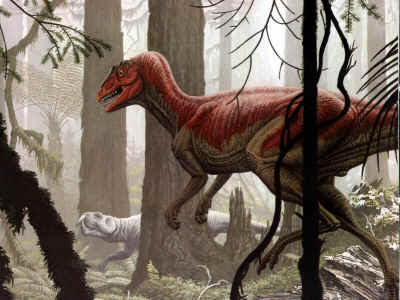 An artist's depiction shows a Herrerasaurus lurking in a forest in what is now Argentina as smaller animals hide in the undergrowth. Herrerasaur fossils are among the oldest ever discovered, dating back about 228 million years to the mid-Triassic.
Posted by Blackrainbow at 11:04 AM