2. Dinosaurs of the Jurassic Period

A period of the Mesozoic era, spanning the time between the Triassic and the Cretaceous periods, about 206 to 144 million years ago. The start of the period is marked by the major Triassic-Jurassic mass extinction. Named for the Jura Mountains on the border between France and Switzerland, where rocks of this age were first studied, the Jurassic became a household word with the success of the movie Jurassic Park – although most of the dinosaurs featured in the film actually lived during the Cretaceous. 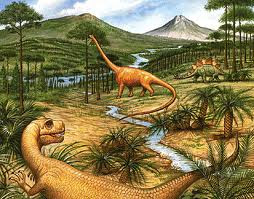 reptiles dominated the land, sea, and air. During this period, vegetation was greener and more lush. By the late Jurassic, great dinosaurs such as Brachiosaurus, Allosaurus, Ceratosaurus, and Stegosaurus, had evolved on land. Pterosaurs ruled the skies and the earliest known birds appeared.

The Jurassic was the beginning of the age when reptiles dominated the land, sea, and air. During this period, vegetation was greener and more lush. By the late Jurassic, great dinosaurs such as Brachiosaurus, Allosaurus, Ceratosaurus, and Stegosaurus, had evolved on land. Pterosaurs ruled the skies and the earliest known birds appeared. 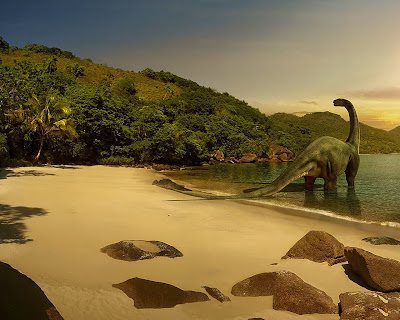 The Jurassic Period also saw the breakup of the super-continent Pangea, which began in the Triassic, continue. At the start of the early Jurassic period, the giant continent Pangaea broke up, forming the beginning of the world that we now know. There were huge volcanoes with rivers of lava and clouds of poison gases.
Land that had been part of the interior of the huge continent was now coastline of smaller continents, and the climate began to change accordingly.
Forests of ferns, ginkgo trees, cycads and conifers grew. All these plants can still be seen today. Scuttling about at the bottom of these plants were the early mammals, all of them rat-sized.

The dominant land animals were the huge dinosaurs, the largest land animals ever. They were the gigantic herbivore (plant-eaters) sauropods such as Diplodocus and Brachiosaurus. Other herbivores included Stegosaursaurus. Carnivorous (meat-eating) dinosaurs included Allosaurus and Dilophosaurus.

The dinosaurs of the Jurassic were much more different from each other than in other periods: there was a greater variety. Because of the different climate, the forests grew, and the herbivores became huge in order to feed on the tall trees. The carnivores then had to become larger and more fierce to deal with such huge prey.
The first birds appeared, such as Archaeopteryx. The seas were full of marine reptiles such as the plesiosaurs, crocodiles, ichthyosaurs, sharks and rays. 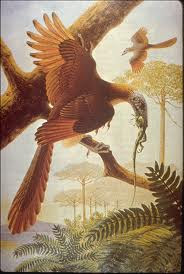 Some Dinosaurs of the Jurassic Period
1.Stegosaurus  (say steg-uh-SAW-rus) 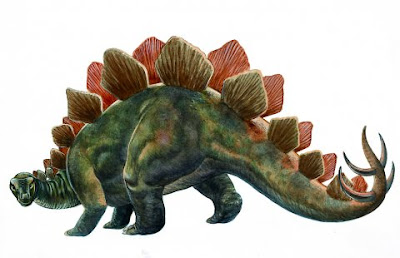 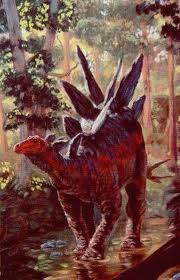 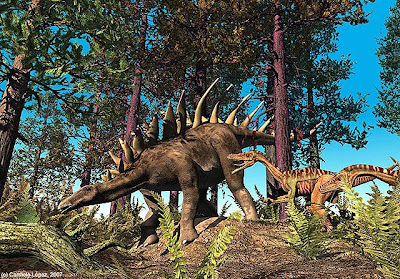 Stegosaurus lived about 160-145 million years ago during the late Jurassic Period. It was over 8 metres long and weighed about 2 1/2 tonnes. Stegosaurus had a big tail with metre-long spikes at the end for protection against predators.The back legs were twice as long as the front legs. It had a tiny head containing a tiny brain. Its mouth was a toothless beak. It had large, flat, triangular plates along its back, rather like armour. Palaeontologists believe that the triangular plates along the back and tail helped it keep its temperature under control. They may also have been used to attract other stegosaurs. They were made of bone that was not solid, but which had tunnels like tubes along them.
The first Stegosaurus fossil was discovered in Colorado, USA in 1877.
2.Allosaurus (say all-oh-SAW-rus) 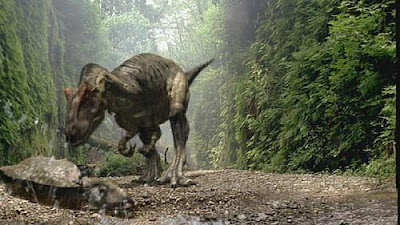 The name means 'different lizard', because its vertebrae (bones of the spine) are different from that of other dinosaurs. Allosaurus lived about 150 to 145 million years ago in the Late Jurassic period. It was about 12m long and weighed up to 3 tonnes
Allosaurus was a 'lizard-hipped' dinosaur (or theropod). It had a bony crest above each eye and an s-shaped neck. It moved on its two strong back legs.
The back legs had three toes pointing forward and one pointing backwards. It was not a fast runner however. It had a powerful tail.
Allosaurus was a carnivore with big, curved teeth that were grooved for extra sharpness. The strength in its back and neck helped its jaws tear up its prey. Allosaurus had short arms with three long claws that held onto prey such as large sauropods. Allosaurus had quite short arms compared to its legs, but they were powerful. They had three long, hook-like claws that were important for attacking and holding on to prey.
More than 60 Allosaurus skeletons have been found in Wyoming, New Mexico and Utah in the USA, and Tanzania . The most complete was found in 1883.
3.Brachiosaurus (say BRAK-ee-oh-SAW-rus) 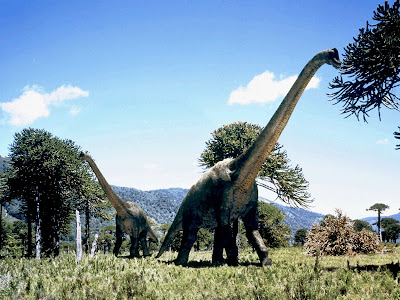 Brachiosaurus lived about 150 to 145 million years ago in the Late Jurassic period. Its name means 'arm reptile', because its front legs are much longer than its back legs.
Brachiosaurus was a dinosaur in the group known as sauropods. It was about 25m long and about 13m high. It was able to eat from the tallest trees, feeding on leaves and fruit with its chisel shaped teeth. 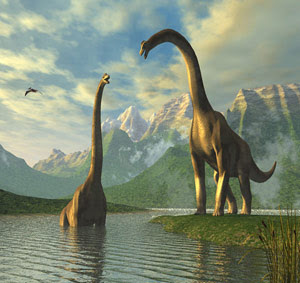 Brachiosaurus was one of the biggest land animals ever, probably weighing about 80 tonnes. Good fossils have been found in Colorado, USA and Tanzania.
4.   Diplodocus (say dip-LOD-oh-kus) 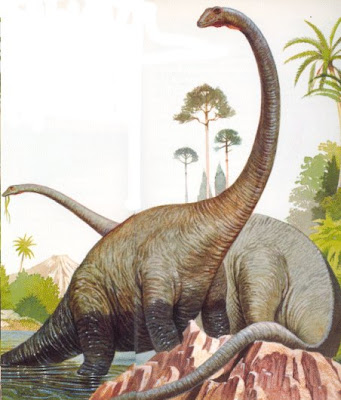 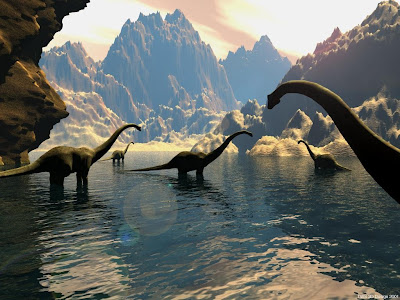 The name means 'double beamed lizard' because it had extra bones to help support its spine.
Diplodocus lived about 150 to 145 million years ago in the Late Jurassic period. It was part of the group of dinosaurs known as sauropods. The Late Jurassic period was a time when there were many sauropods.
Diplodocus was a 'lizard-hipped' dinosaur that was about 45 metres long. Much of its length was the tail, which flicked like a whip. Diplodocus weighed about 30 tonnes. Its height at the hips was about 5 metres. It was the longest of the dinosaurs, but not the heaviest. Its brain was not much larger than a tennis ball, but there were many nerves in the base of its spine. This was necessary for it to cope with such an enormous size and to control its tail and back legs.
Diplodocus was a herbivore. It had peg-like teeth which it used for stripping off soft leaves such as those of ferns. The teeth were not used for chewing however. Diplodocus swallowed stones which helped grind up food in its stomach. This habit is similar to that of modern birds.
Fossils have been found in the Rocky Mountains, Montana, Utah, Wyoming and Colorado in the USA.
Posted by Blackrainbow at 2:35 AM