Pharaoh Tutankhamun's funerary relics occupy a large section of the upper level of the Cairo Museum. This is not surprising, since most of the artifacts are in spectacular condition and many composed of precious metals. But whether they are made with gold, silver, bronze, wood or alabaster, they are all remarkably crafted and beautiful.
King Tut ruled Egypt from 1333 to 1323 B.C., only 10 years, before he was probably murdered and his throne ursurped by his royal vizier, Ay. He came to rule in the midst of political and religious turmoil brought about by his father, Akhenaten.

The treasures of Tutankhamun have been marveled at since their discovery by Howard Carter on November 4, 1922. It was the first, and to this day the only, royal tomb in the history of Egyptology to be found practically untouched, even though in ancient times it had been the object of no less than two attempts at robbery.   The emptying of Tutankhamun's tomb lasted several years and made possible the recovery of about 3500 articles, confirming the tomb as the most exceptional archeological discovery ever made in Egypt. A few of the items are displayed here.

The tomb of Tutankhamen is located in The Valley of the Kings. It was hidden for more than 3,300 years. In November 1922, Howard Carter, an expert in the study of ancient Egypt, discovered it. 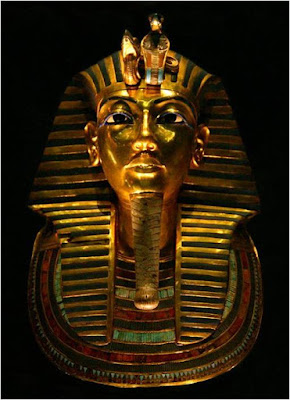 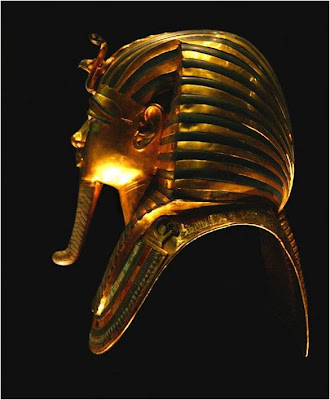 Tutankhamun's famous gold funerary mask rested directly on the pharaoh's mummy inside the third coffin. The pharaoh wears the classic nemes headdress striped with transversal bands of glass paste imitating lapis lazuli and is adorned with a wide collar composed of streaks of semiprecious stones and colored glasses. The eyes are made of quartz and obsidian.   As on the coffins, the lapis-lazuli outline of the eyes reproduces the distinctive kohl eye make-up originally applied to protect against the sun's glare but increasingly employed for its beautifying effect.
His funerary mask is perhaps the most impressive piece in the collection. The mask is about 25 pounds of solid gold, inlaid lapis lazuli, carnelian, quartz, turquoise, obsidian, and colored glass. 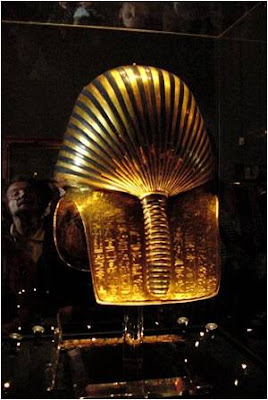 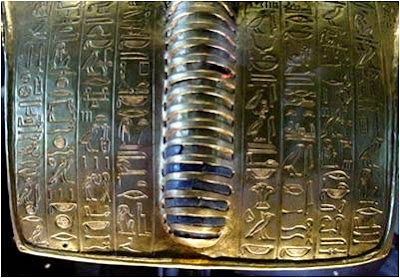 The beautiful mask is extremely lifelike and attracts the most tourists of any other object on the upper level of the museum. The back of the mask is engraved with a magic formula for added protection of the body.


His body was encased in a series of three coffins. Two are on display at the Cairo Museum; the outermost coffin still covers the body of the young pharaoh in his tomb in the Valley of Kings. 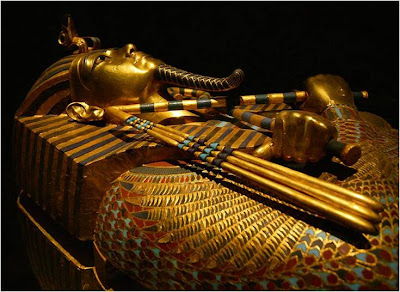 One of the coffins was almost 300 pounds of solid gold, the other was wood, layered with gold. Both were encrusted with precious and semi-precious gemstones and engraved with protection spells. 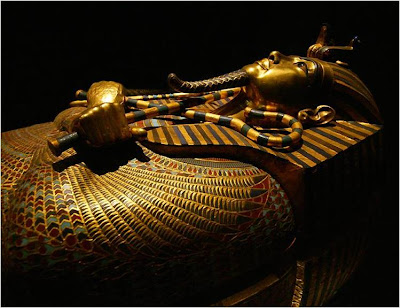 During the process of mummification, his key internal organs were removed from his body and placed into these protective jars. The jars were housed in a chest and the chest was placed inside a large gilded, wooden shrine. 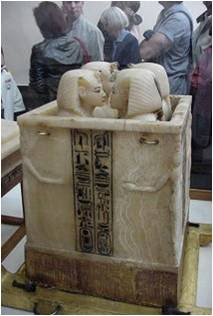 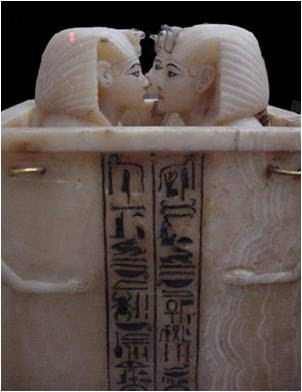 The jars and the chest were carved from white alabaster, quarried from Hatnub, and then carved and painted with hieroglyphic spells. The shrine, along with many other priceless artifacts, was crammed in the small "Treasury of the Tomb". 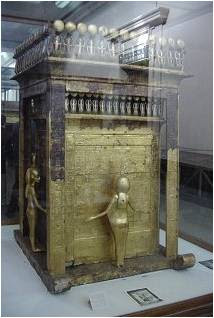 To the right of the shrine there is a wooden statue of Anubis, the guide of the dead, who sits upon a great chest. Both the chest and the shrine are covered in sheet gold and covered with hieroglyphs. 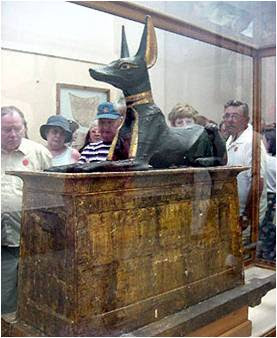 Here are two beautifully carved alabaster items. The one on the left is a perfume jar, and the container on the right was probably made to hold ointment or sacred oils. 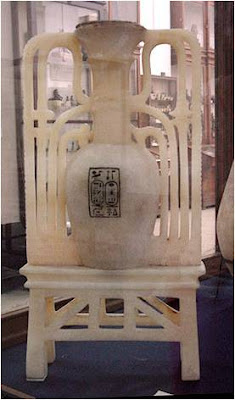 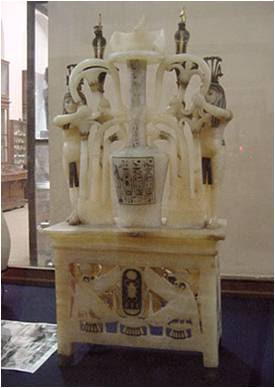 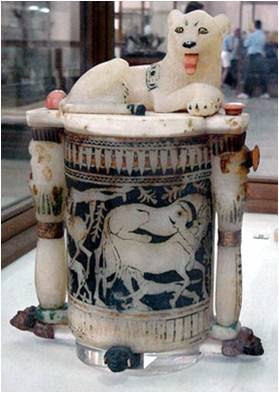 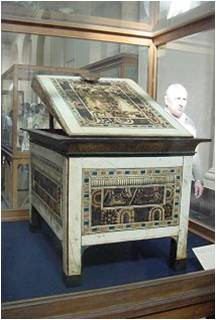 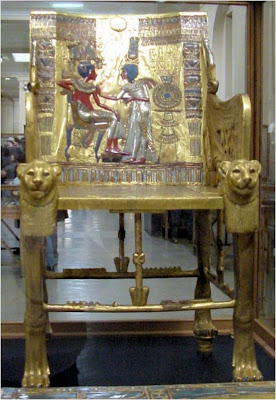 This marvelous chair was found in the annex of the antechamber among a jumble of furniture, boxes, and objects of alabaster. 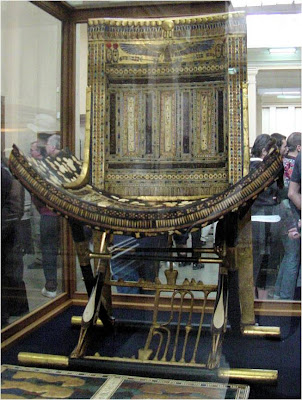 Tutankhamun was entombed with 413 shawabtis. Shawabtis are figurines
that would assist the deceased when they entered the afterlife. 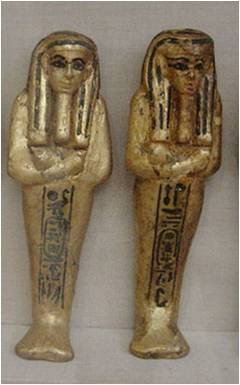 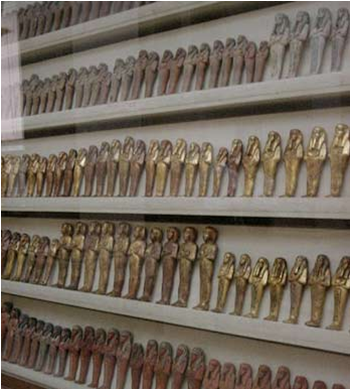 Hundreds of other items were found in Tutankhamun's tomb. Furniture, food, jars of beer, clothing, jewelry and other riches. Above right is a gilded divan. 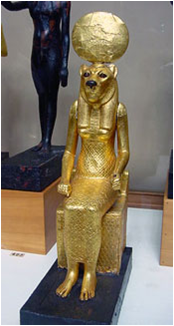 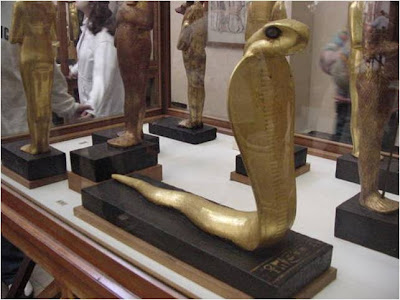 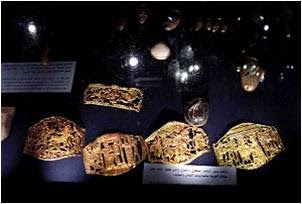 A pectoral of Tutankhamun, who, with his advisors, was at pains to emphasize the return to diverse worship of the sun and other deities after Akhenaten's experiment with monotheistic Atenism.  Two forms of the sun-god are incorporated into this pendent: the scarab beetle Khepri, god of the rising sun who each day pushed the solar disc into the sky, and the winged solar disk with uraei most commonly known as Horus Behdety or Horus of Edfu, son and heir of Ra and mighty defender of his royal father against Set.  The scarab in this pectoral is made from a green stone, the color symbolizing rebirth.  The scarab is winged and holds Tutankhamun's cartouches in front of itself.  The feathered wings of the scarab are supported by the kneeling figures of Nephthys and Isis, respectively to the left and right of the scarab, wearing the hieroglyphs that signify their names on their heads.  The decoration of the pendant is executed in the cloisonné technique, with thin gold wires forming small cells that were typically filled with colored glass

Posted by Blackrainbow at 9:24 AM