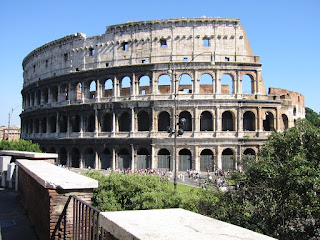 The Roman Colosseum was a huge amphitheatre built between 69 and 79 CE. During the era in which the Colosseum was used, the Romans established and organized many types of games and other forms of entertainment.The events that took place there were gladiatorial combats, wild beast hunts, vaudeville acts, and many types of theatrical entertainment. Among these, the gladiatorial combats and the wild beast hunts made up most of the program. A typical day in the Colosseum began with a succession of bloodless duels often comic or fantastic, but others were extremely gruesome. The Romans were obsessed with blood. They enjoyed watching one man kill another man, or watching one man kill many innocent animals. What the Romans called entertainment back then is what we call murder today. However, it seemed as if the Romans were obsessed with bloody battles and death. The most popular form of entertainment was the gladiatorial combat which was usually fought to the death. Other forms of entertainment that did not involve blood and death were vaudeville or circus acts, chariot racing, various types of theatrical entertainment like mime and plays of tragedy and comedy.


In 80 CE., Titus inaugurated the opening of the Colosseum with one-hundred consecutive days of gladiatorial contests, a sport adopted from the Etruscans. Holland (1980) mentioned that, at the beginning of the second century CE., a spectacle was held in which 4,941 pairs of gladiators fought. Gladiatorial combat was the most bloody yet entertaining event that occurred in the Colosseum. 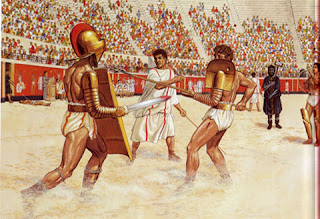 Gladiatorial events were not annual like horse racing and theatre, just on given occasions. A duel was fought to the death by a chief's tomb whose spirit required the sacrifice of blood. Then the Romans considered the duel as a memory of death of great leaders. Duels between gladiators became a business to invest in. All the gladiators that fought before the audience of the Colosseum, went to a gladiatorial school beforehand. The most renowned gladiatorial training schools were south of Rome in Capua. Lanista was the word for gladiatorial school. Going to the Lanista was similar to a punishment. Criminals were sent to gladiatorial schools instead of being exiled. Magistrates purchased them and promised that they would be dead within a year, or criminals would be forced into the arena in a herd to be butchered by gladiators. Slaves were sometimes sent to the school if they weren't of any use. Slaves could sometimes win freedom if they fought a good duel; however, the crowd was the judge of that. 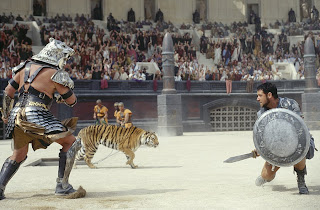 Augustus Ceasar began the spectacle where criminals were paired against animals, without weapons for protection. "At vast expense the Roman government imported animals from every corner of the known world--tigers from India, leopards from Asia minor; lions, elephants and other creatures from Africa; wild bulls from Northern Europe; and so on." 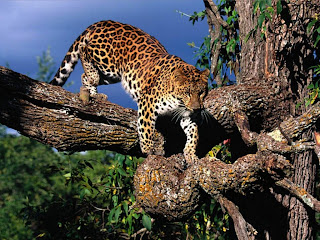 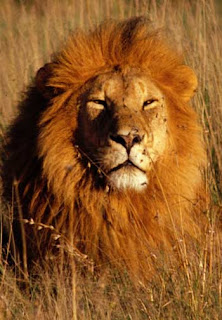 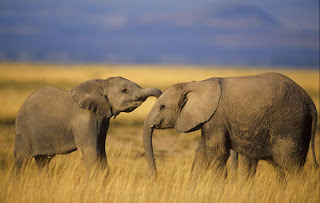 According to the spectators, the more exotic the animal, the better the fight. When Titus opened the Colosseum in 80 CE., "the gladiatorial combats resulted in the deaths--in one day--of five thousand beasts. From this statement alone, it is safe to say that ancient Romans were fascinated, if not obsessed, with slaughter. The term used for a fight between a man and a beast was "venatio," which was an event favored by the spectators of the Colosseum. Often criminals or slaves were condemned to face a starved wild beast. Lions were starved for three days prior to the event If the beast was lucky enough to kill its prey and survive, its fate would still be to die by being put in the arena with the bestarii, a man specially trained to kill wild beasts. This led to the depletion of many "exotic" animals.
Just as the audience was impressed with exotic animals, they were also entertained by different types of combat. It was not uncommon for the arena to be flooded so that naval battles could be held. 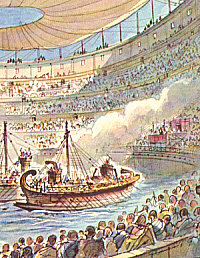 Even more interesting was the introduction of freak fights. These fights were rare and only took place occasionally. One such battle was held by Dominitian in 90 BCE. between a dwarf gladiator and a woman. Other surprising combinations were paired together based on the whim of the current emperor. Apparently, it took some imagination to put on a show for the ancient Romans.
The Romans were very methodical in their process of handling the wounded and dead in the Colosseum. During a battle, if one opponent became injured, he would drop his shield and raise the index finger of his left hand. It was then up to the spectators to decide his fate. If he had displayed bravery and fought well, the crowd might wave handkerchiefs and give him a thumbs down, meaning that he deserved to be spared.


"The duels between gladiators, although cruel and bloody, at least involved a display of skill, as well as a good chance of coming out alive," (Casson, 1975, 100). However, they could also give him a thumbs up, or death. (Knapps, February 14, 1997) It was extremely rare for a gladiator's life to be spared because the spectators almost never had mercy on their victims. After the gladiator appeared to be dead, officials dressed as "charons," or demons from the underworld, checked to make sure that he was actually completely dead. They assured this by hitting him over the head with a mallet or burning him with a hot iron, so if he had not passed away, he would very soon. He was then dragged out of the arena to the playing of trumpets. Then an attendant added clean sand to absorb the blood. In fact, the name "arena" is used because the word "arena" means "sand.
Nowadays, the Colosseum is so well-known that
famous people have filmed commercials there
INTERESTING FACTS ABOUT THE COLOSSEUM
1.    At the time of its construction, the Colosseum had the capacity of seating around 50,000 spectators.
2.    The games played in the Colosseum are believed to have taken the lives of about 500,000 people and over a million wild animals.
3.    Though ruined by earthquakes and stone-robbers, the amphitheater serves as an iconic symbol of Imperial Rome.
4.    The Colosseum is an entirely free-standing structure, 189 m (615 ft) long, 156 m (510 ft) wide and with a base area of 6 acres (24,000 m2).
Posted by Blackrainbow at 8:27 PM