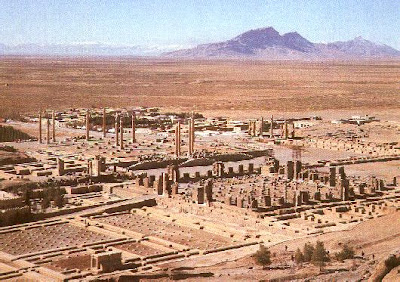 Persepolis (Old Persian Pârsa, modern Takht-e Jamshid): Greek name of one of the capitals of the ancient Achaemenid empire, founded by the great king Darius (522-486 BCE). 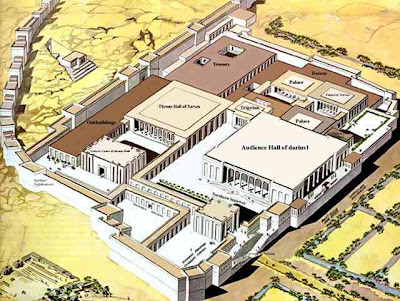 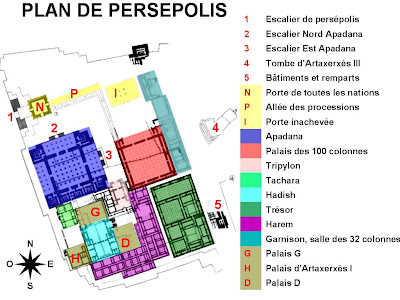 There are some indications that the site of Persepolis was already a government's center under Cyrus the Great (559-530) and his son Cambyses II (530-522), but there are no archaeological traces of this older phase. However this may be, it seems as if Darius 'invented' Persepolis as the splendid seat of the government of the Achaemenid Empire and as its center for receptions and festivals. The wealth of Persia was to be visible in every aspect of its construction. Persepolis was a showcase .
The first building phase may have lasted from 518 to 490. Darius' men leveled the ground and created a terrace of 450x300 meter, on which stood a large building and an audience hall. In the Treasury, the booty of the conquered tribes and states and the annual tribute sent by the king's loyal subjects on the occasion of the New Year's festival, were stored. Many people were employed to keep the gold and silver shining: from the Fortification tablets, it is known that in 467 BCE, no less than 1348 people were employed in the treasury. 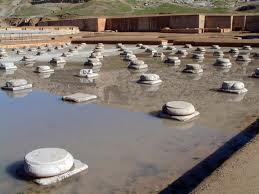 The square audience hall, which was at the heart of the terrace, is usually called the Apadana. Its eastern stairs are famous for its representation of the people of the empire. (The decoration of the northern stairs, which is roughly similar, is of lesser quality.)
The hall could contain hundreds, probably thousands, of people at the same time. It was the largest and probably the most beautiful of the buildings at Persepolis. 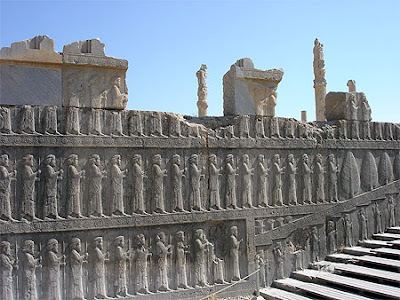 The seventy-two columns which supported the roof were twenty-five meters high (thirteen can still be seen). The founding inscription reads:
Darius the great king, king of kings, king of countries, son of Hystaspes, an Achaemenian, built this palace. 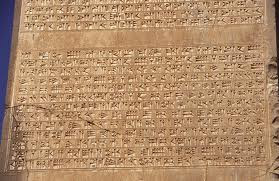 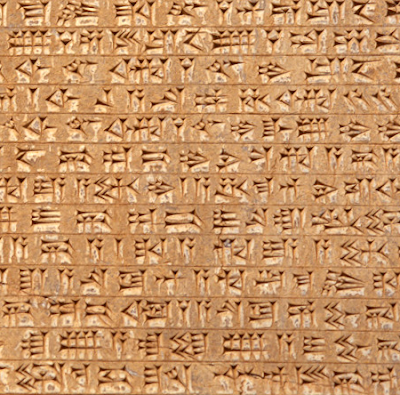 During this first building phase, a complex system of water channels and drainage was cut into the rocky terrace.
The second phase, between 490-480 , consists of buildings started by Darius but completed in the first years of the reign of his son and successor, Xerxes (486-465). Actually, Persepolis is mostly the work of this king. He tells us in an inscription:
“When my father Darius went away from the throne, I became king on his throne by the grace of Ahuramazda. After I became king, I finished what had been done by my father, and I added other works.”
The Apadana was finished and a small palace was added to the south of the Apadana . It is usually called Darius' Palace, although he probably did not live to see the building finished. The ancient Persian name was Taçara, 'winter palace'.

To the north of the Apadana, the Gate of All Nations  (also known as Xerxes' Gate) was built, which was guarded by a pair of large bulls in the west and lamassu's in the east (a lamassu is a bull with the head of a bearded man). 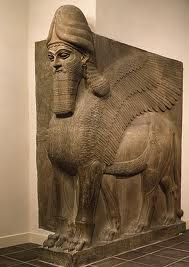 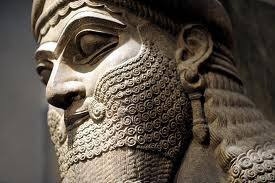 Walls were constructed on the northern ridge of the terrace fortification. In front of Xerxes' gate was a monumental double-ramped stairway, which was designed in such a way that one could only proceed slowly and with dignity.
Above these lamassu's, an inscription was written:
A great God is Ahuramazda, who created this earth, who created yonder sky, who created man, who created happiness for man, who made Xerxes king, one king of many, one lord of many.
I am Xerxes, the Great King, King of Kings, King of countries containing many kinds (of men), King in this great earth far and wide, son of King Darius, an Achaemenian.
Proclaims Xerxes the King: By the favor of Ahuramazda I built this Gateway of All Nations. I built many other beautiful things in Persia. I built them and my father built them. All beautiful things we built, we have built by the favor of Ahuramazda.
Proclaims Xerxes the King: May Ahuramazda protect me from harm, and this land, and whatever was built by me as well as what has been built by may father.
In the next decade, 480-470, Xerxes' palace  was built between the Treasury and the Apadana. The Persian name was Hadiš, 'dwelling place'. It was twice as large as the palace of Darius. Meanwhile, the western part of the Treasury was reconstructed; this part became known as the Queen's Quarters. The women lived in their own rooms, situated around a spacious courtyard. In these years, the Treasury -probably not big enough to store the booty of Xerxes' successful wars- was enlarged to the north. Many buildings were built on the southern edge of the platform; they may have been magasins. 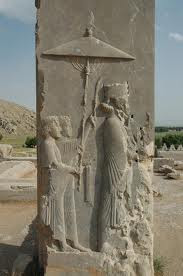 In the fourth phase, the Palace of Artaxerxes I and the Hall of Hundred Columns were added. It was Persepolis' second largest building, measuring 70 x 70 meters. This throne hall was finished by Xerxes' son Artaxerxes I Makrocheir (465-424). At a certain moment, its function was changed and it became a store room, probably because the treasury was again too small to contain everything.
In about 450 BCE, the complex was more or less finished and there was probably no building activity for almost a century.
King Artaxerxes III Ochus (358-338), who was in a sense the last ruler of the Achaemenid empire, added a Hall of Thirty-two Columns, a corridor, the tomb of Artaxerxes II and his own tomb.
The rock-cut tomb has a relief, which shows the king worshiping before a fire altar; this is inspired by the tombs of Darius the Great and his successors at Naqš-i Rustam, which is one hour's walk north of Persepolis. The corridor connected the Gate of All Nations with the Hall of Hundred Columns; we can imagine how delegations from the subject countries passed through this corridor to bring their tribute to their ruler. On both sides of the corridor were store-rooms.
Artaxerxes III Ochus' successors Artaxerxes IV Arses (337-336) and Darius III Codomannus may have done something to build a large gate; but this gate was still unfinished when the Macedonian king Alexander the Great captured Persepolis in the first weeks of 330 BCE.
Archaeologists found two cuneiform archives. The oldest and largest archive are the Persepolis fortification tablets, 25,000 to 30,000 in number, of which some 2,000 are published and an additional 1,500 were read but not really published. They were written in Elamite, the language of the Persian chancellery, and deal with economic transactions up till 493. Payments are done in kind. The other archive, the Persepolis Treasury Tablets is smaller (139 tablets) but similar to the first one; it describes payment in silver between 492 and 458. Moreover, king Xerxes left a 'letter to posterity' in the harem room, a long but stereotypical text which is known as the Harem inscription.
As we have already seen, Persepolis was taken by the Macedonian king Alexander the Great in the first weeks of 330. He destroyed several palace buildings (not all!) in April, because he was not yet sole ruler of the Persian Empire, and it was too dangerous to leave the enormous treasures behind, where his enemies could recapture them. The Palace of Xerxes seems to have received a special treatment, because it was damaged more severely than other buildings; it is likely that the Greek soldiers in Alexander's company had their revenge for the destruction of Athens in 480 BCE. When Alexander returned several years later and saw the ruins, he regretted his act.
Although a new capital for Persis, called Istakhr, was built nearby, the old capital was a mere ruin for the next two thousand years. The local population invented legends to explain the existence of the ruins of what was called Chehel Minar, 'forty columns'.
The first westerner to visit Persepolis was a missionary man from Portugal, Antoine de Gouvea, who noticed cuneiform inscriptions in 1602. Sixteen years later, the Spanish ambassador Garcias de Silva y Figueroa saw the ruins; he must have planned his stay, because he visited the place with the World History of the Greek historian Diodorus of Sicily in his hand.
During the next century, several diplomats interrupted their voyage to the Persian court to see Persepolis, but they were no scholars. Between 1664 and 1667, however, the French travelers Jean de Thévenot (1633-1667) and Jean Chardin (1643-1713) did some serious research. In his Voyage au Levant, Thévenot reached the conclusion that Chehel Minar could never have been the palace of the kings of ancient Persia, because it was too small. The columns he saw, were, in his view, the pedestals of the idols of the Persians. As we have seen, he was wrong, but other observations were correct. 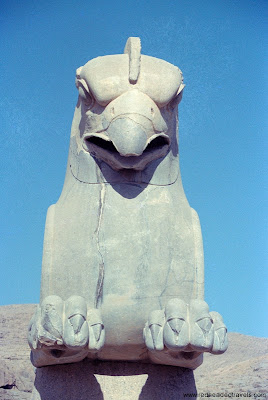 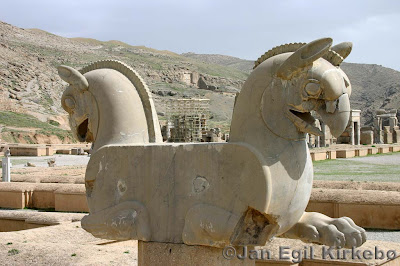 The first to make a real contribution to the study of the ruins and to identify them as the capital of ancient Persia, was a Dutchman, Cornelis de Bruijn (1652-1727), who visited Persepolis in 1704/1705. He made many beautiful drawings, which he published in 1711 in Reizen over Moskovie, door Persie en Indie. His drawings were long considered as the best representations available, until the first photographers visited the place in the twentieth century.
After a dig in 1878, which was organized by the Persian governor of the Shiraz region, the first archaeological research was executed by the Oriental Institute of Chicago: Ernst Herzfeld and F. Schmidt were working in Persepolis from 1931 to 1939. Ever since, archaelogists of many nations have been working at the Persepolis. 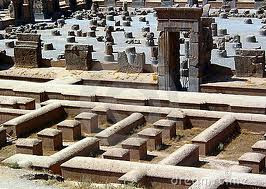 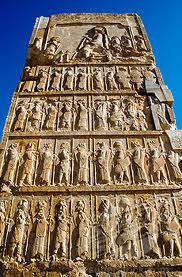 Posted by Blackrainbow at 12:06 PM